The COVID-19 pandemic has disrupted just about every part of everyday life. Even industries that are accustomed to and plan for disruptions, like the food industry, have had to get creative in handling the unique set of circumstances the pandemic has created.

Grocery shopping, a regular part of the average American’s week, suddenly faced unprecedented issues. Social distancing measures and stay-at-home orders had many questioning whether it was safe and ethical to shop in person.

With aimlessly wandering the aisles a thing of the past (for now), many found themselves turning to grocery delivery services, like Mercato, to allow them to stock their pantries and fridges while minimizing contact with others.

One thing on many people’s grocery list? Alcohol. While it’s unclear whether people have been drinking more than before the pandemic, the closure of bars and restaurants throughout the pandemic had people seeking out a buzz at home.

To analyze trends in alcohol purchases throughout the pandemic, we examined data from Mercato orders placed between March 22, 2020, and July 31, 2020. Read on to find out how much alcohol sales grew, what beverages proved most popular, and what products were most popular in New York City and Chicago – two early hot spots for the virus in the U.S.

A Spike in Demand 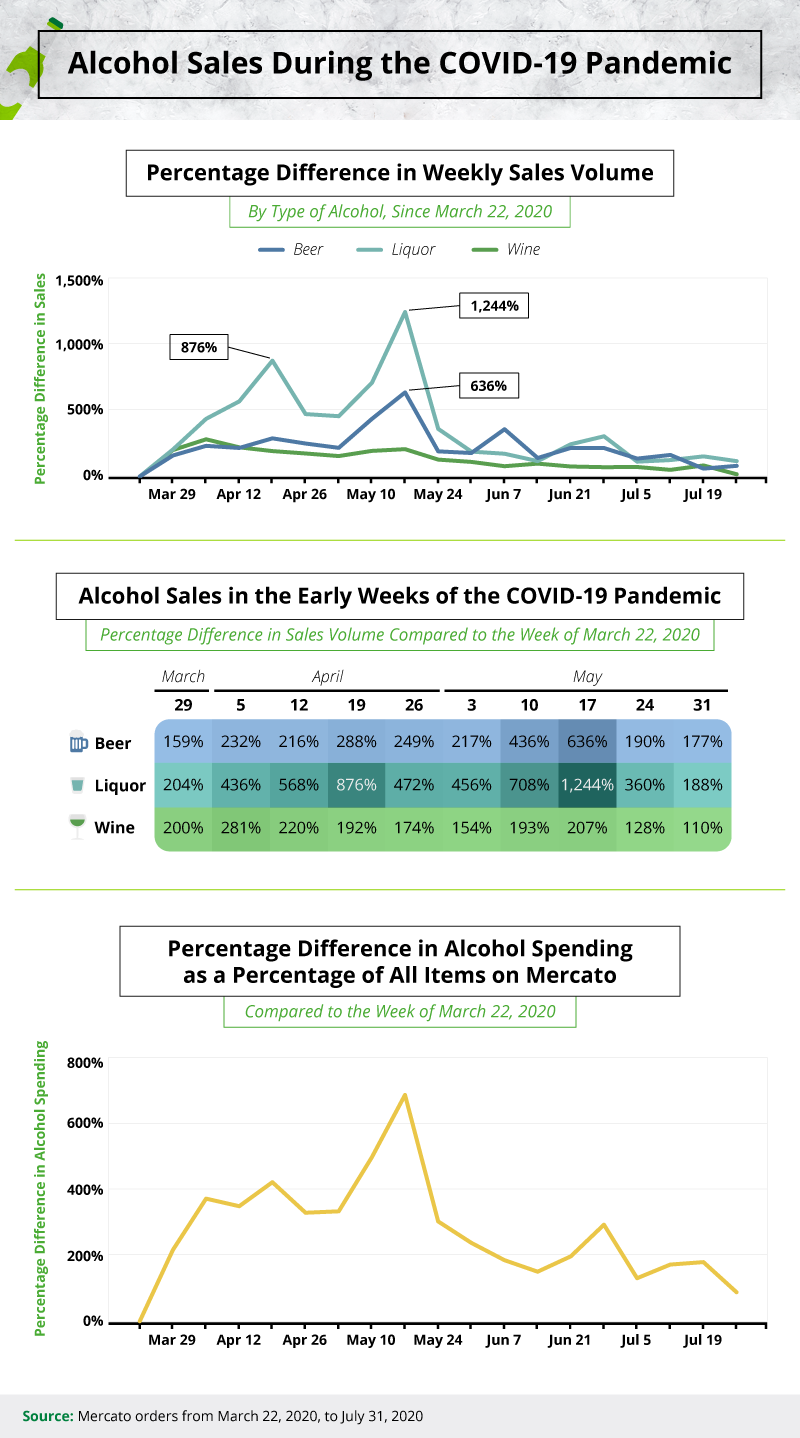 According to Mercato order data, it didn’t take long for consumers to ramp up alcohol ordering once the pandemic hit the U.S. Using the week of March 22, 2020, as a starting point, we compared the sales volume of alcohol products on Mercato each week to that start date.

But the growth didn’t stop there. Liquor sales growth on Mercato didn’t peak until the week of May 17, a whopping 1,244% increase in sales since the March 22 baseline. Beer sales also saw their biggest percentage increase from the baseline that week at 636%.

Not only did we see the number of sales go up for alcohol products, we also saw spending on alcohol as a percentage of people’s total grocery bill go up throughout the pandemic.

For example, in the week of May 17, alcohol spending as a percentage of total grocery bills increased from the March 22 baseline by 686.9%. Throughout the early months of the pandemic in particular, there were widespread reports of various food shortages that left consumers scrambling to find certain items.

While alcohol may not have been one of the major shortages, people might have had it in their minds to stock up while they could.

Best-Selling Alcohol of the Pandemic 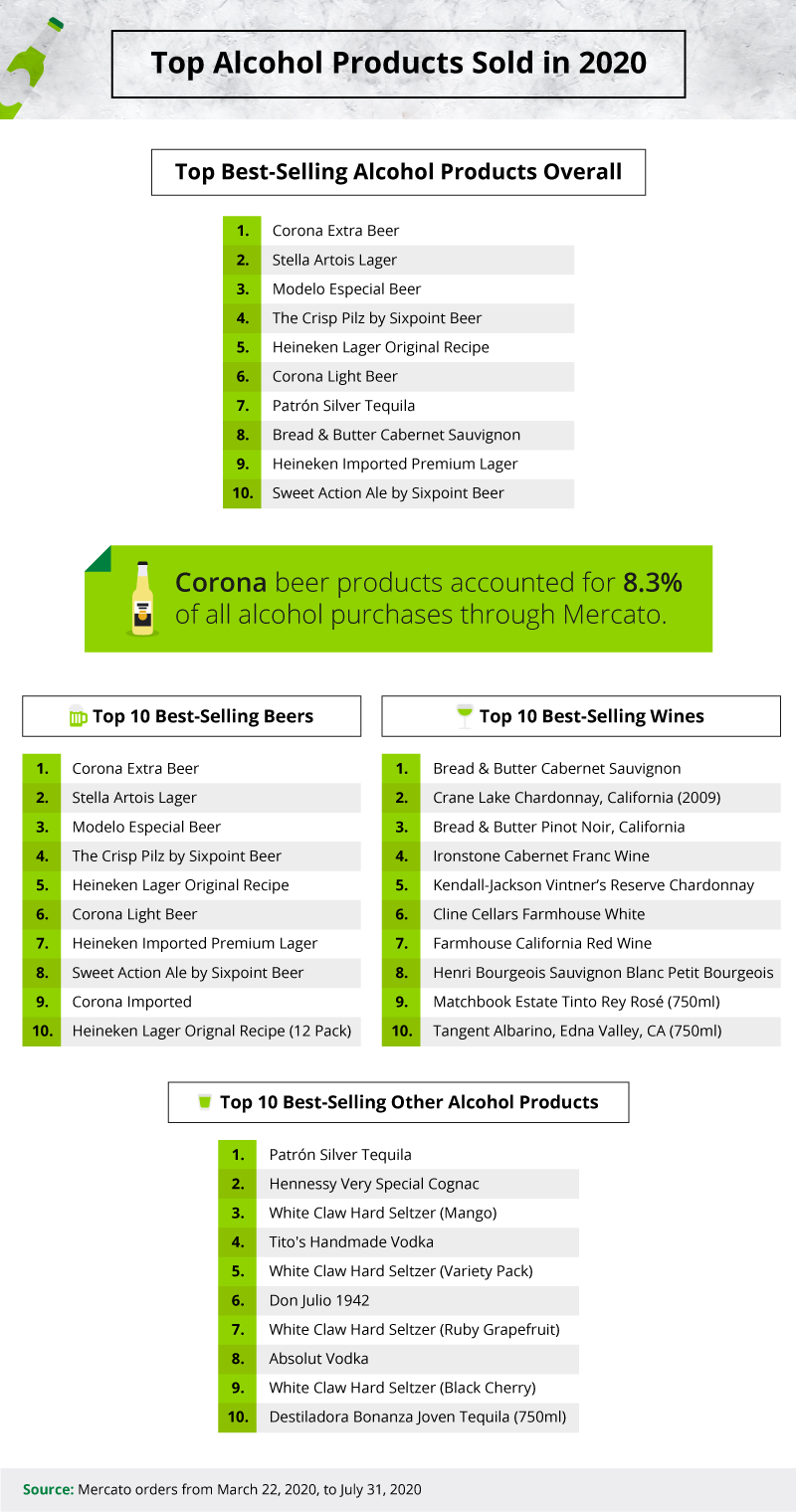 Beyond the numbers and percentages, we wanted to look at the specific products and beverages people were gravitating toward for their quarantined happy hours. Ironically, Corona Extra was not only the most purchased beer but the most purchased alcohol product overall through Mercato.

Despite early reports that the unfortunate name coincidence might do the beer brand in, Corona products accounted for 8.3% of all alcohol products in the time period we looked at – more than any other.

For wine, Bread & Butter, a California wine producer based in Napa Valley, topped the list with its cabernet sauvignon, followed by Crane Lake’s 2009 California chardonnay. Patrón Silver tequila topped the list of other top-selling alcohol products. Interestingly, White Claw Hard Seltzer occupied 4 of the top 10 spots, with mango, ruby grapefruit, and black cherry emerging as popular flavors, along with the brand’s variety pack.

While some may have dismissed White Claw and the boom of hard seltzers as a fad when they gained popularity in the summer of 2019, some believe this trend is here to stay. 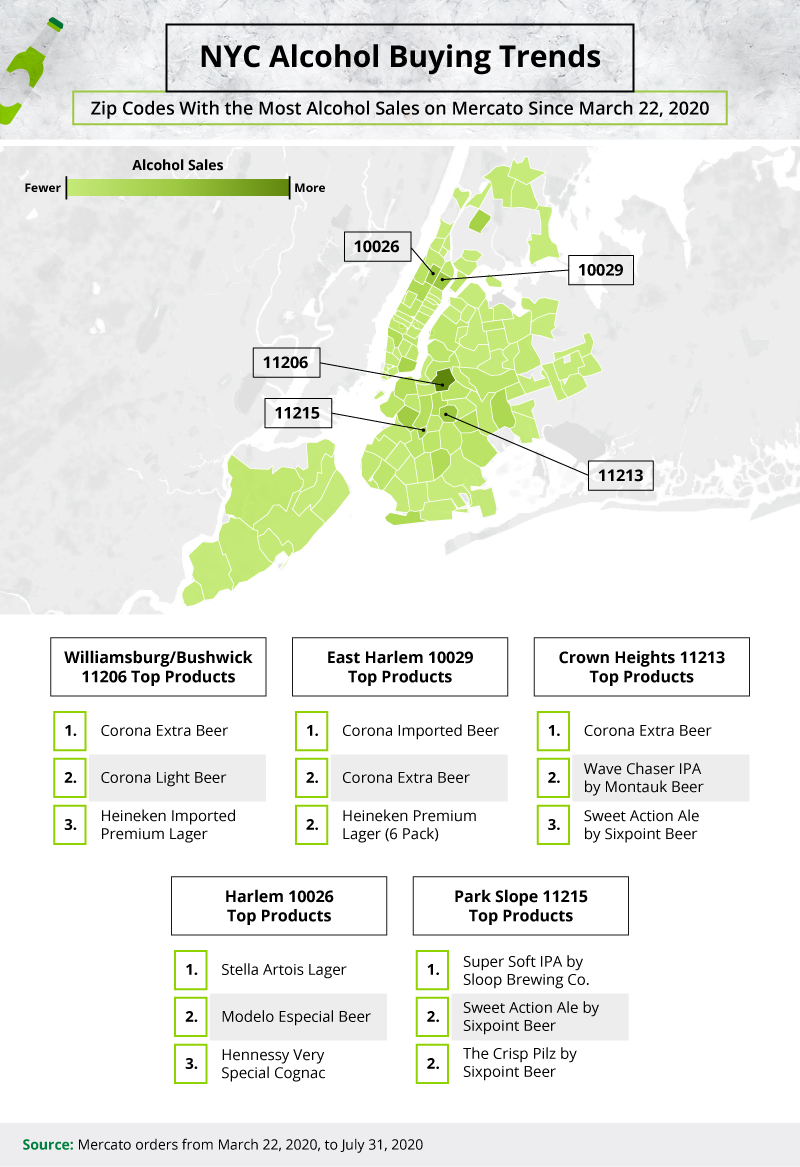 As an early COVID-19 hot spot in the U.S., New York City and its residents had a lot to deal with as cases climbed rapidly in March and April. Demand for online grocery delivery skyrocketed, rising so quickly that some providers had a difficult time meeting the increased need.

Based on Mercato ordering data, five New York City ZIP codes were responsible for the most alcohol purchases from March to July: 11206, 10029, 11213, 10026, and 11215. Mercato typically works with smaller grocery stores and markets, rather than large chains. A greater emphasis on local goods was apparent in the top-selling alcohol products in the NYC ZIP codes analyzed.

While the 11206, 10029, and 11213 ZIP codes were all topped by Corona products and Heineken, beers from local breweries were in the top products ordered in Crown Heights (11213) and Park Slope (11215). The Sweet Action IPA from Sixpoint Brewery, founded in Red Hook, Brooklyn, in 2004, was popular in both ZIP codes. The Crisp Pilz was another Sixpoint brew frequently bought in the 11215 ZIP code of Park Slope. 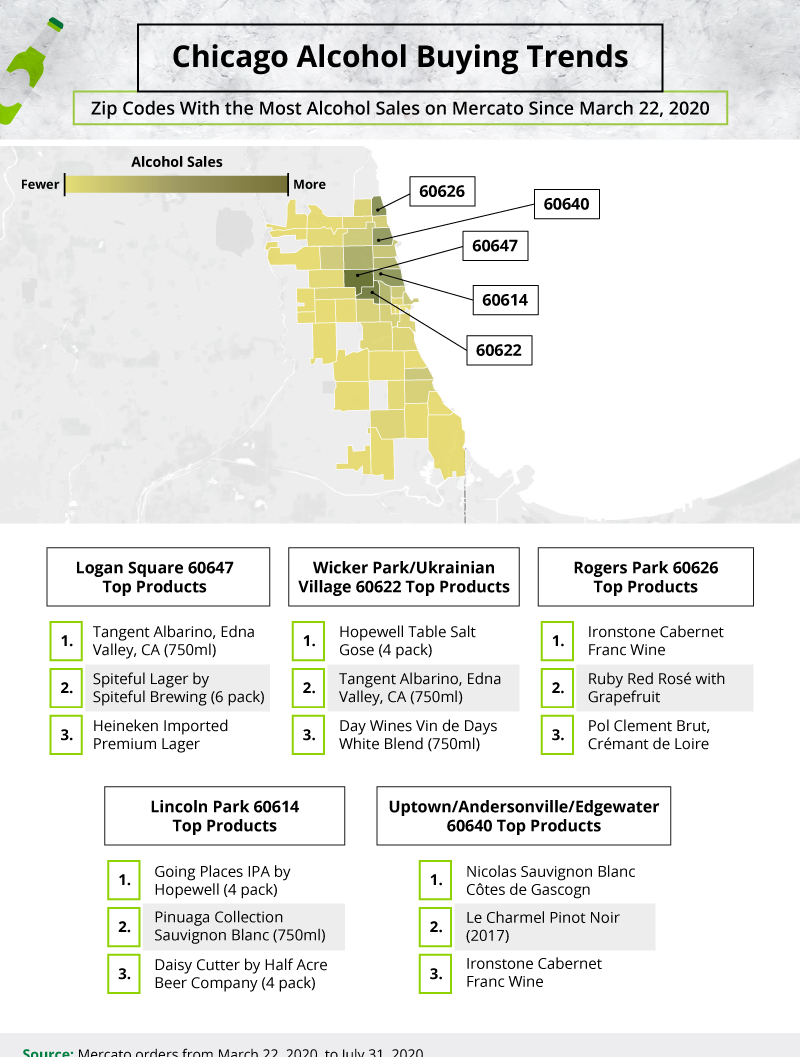 Chicago was another major metro area that experienced severe impacts from the virus early on in the pandemic. Like NYC, we examined ZIP codes that were purchasing alcohol products at a higher rate than others in the city.

Wine made the top products list in each of the top five Chicago ZIP codes, while it didn’t make it onto any of the lists for the ZIP codes buying the most alcohol products in NYC.

However, similar to New York, beers from breweries local to the area made it into the top Chicago ZIP codes. The Table Salt Gose from Hopewell Brewing Co., located in the 60647 ZIP code, was the top-selling product in Wicker Park/Ukrainian Village (60622), while the Going Places IPA, also from Hopewell, was a bestseller in Lincoln Park (60614).

Using Mercato order data from March 22, 2020, to July 31, 2020, we analyzed trends in alcohol sales volume and the popularity of different products overall and based on location.

Top alcohol products ordered were based on quantities sold on Mercato. Unless otherwise noted, we examined specific products rather than the sale of particular brands overall.

While Mercato has locations across the country, these data cannot be considered a representative national sample. The data presented here are based solely on the trends of Mercato customers.

Data were not normalized to reflect variance in participating merchants by area. Therefore, some of these measures would have been influenced by the number of merchants in a given area available on the Mercato platform.

The COVID-19 pandemic has changed everyday life in numerous ways, making it more difficult to do previously simple things like buy groceries or pick up your favorite IPA.

If someone you know would benefit from the information in this project, you are free to share for any noncommercial reuse. Please link back here so the project can be viewed in its entirety and its methodology reviewed. This also gives credit to our contributors, without whom this work would not be possible.